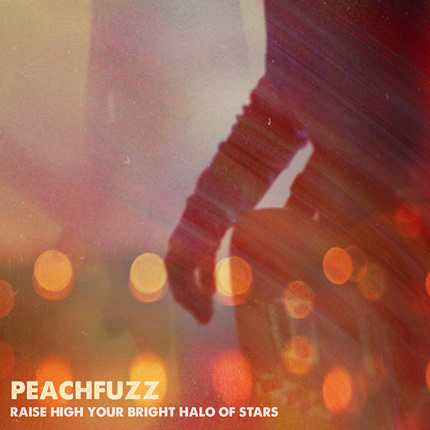 Raise High Your Bright Halo Of Stars
by Peachfuzz

The brilliant Peachfuzz return with their 4th studio album

Titled Raise High Your Bright Halo Of Stars, Adam Jones and company have put together a magnificent selection of songs that deliberately and consistently bridge the genres of solid power-pop, 90s alternative and classic rock and roll, all the while balancing the finest of melodies with Adam's gravelly vocals.

After their solid debut album, 2010's Everything Takes Forever and 2012's more aggressive We Are Solid State album, Peachfuzz settle into a groove on Raise High... which highlights a band at their absolute best. Adam still cites Teenage Fanclub (and, transitively, Big Star) as a major influence but there's no mistaking the fact that Peachfuzz have now been at this game long enough to ensure that they no longer feel shackled to the sounds of their heroes.

Of course, the backing vocals are present and correct while the guitars chime out in style. Lyrically, the band continue to explore themes of love and loss, of broken relationships, nights that got out of hand and the mornings that followed. There is a narrative that runs through all of Peachfuzz's albums and here we pick up where We Are Solid State left off... The deliberate pacing of the album matching the maturity of our protagonists as each song bleeds into the next, chapters to a greater story. From opener "Something's Wrong" to the final chords of the laid back "Giving Up", Raise High... doesn't waste time basking in its own cleverness, it doesn't offer variety for variety's sake and it doesn't give a shit about current musical trends. Because of this it might just be one of the most cohesive, solid and, dare we say, timeless guitar-based records you'll hear all year.