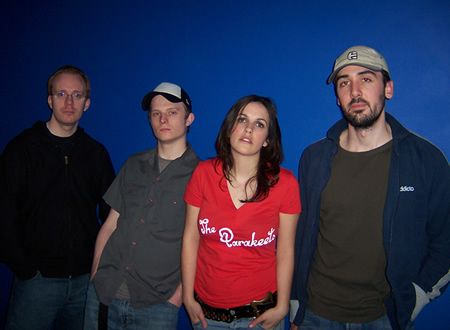 Taking their cues from 90's emo/indie-rock, Remainderfour combined personal and socially-aware tales of woe with soaring melodies and a punk-rock integrity.

The seeds of Remainderfour grew out of the ashes of UK emo-hardcore veterans Otherwise (Firefly Records). After that band split in the summer of 2003, guitarist Chris Wooding and drummer Paul Coleman set about putting together a new project that would better reflect the musical direction that they wanted to take: heavy yet melodic, accessible yet interesting, and most importantly unique. To facilitate this approach they switched to playing different instruments to those they had played in Otherwise, Chris taking the bass and Paul the guitar.

The next step was to find someone to front the band. Both were adamant that the vocalist would have to be outstanding for the project to work, and having been in bands with exclusively male singers in the past they wanted female vocals for Remainderfour. They found their frontwoman in Gemma Mather, a friend of Chris’s whom he knew from his university days in Sheffield, and former singer of eclectic rockers Mine. A chance meeting at a party brought them Steve Durham to complete their lineup.

With all four members now in place and together in London, the songs started coming. Through their contacts in previous bands, Remainderfour began securing themselves gigs all over England. And in March, they went into the studio for the first time to record a three-track demo with John Hannon, producer of Hundred Reasons, Kids Near Water, Dead Inside and countless others.

The demo caught our ear and the band were promptly asked whether they'd like to join Bombed Out. Being of sound mind they said yes and we got the band back in the studio to record their debut album, On With The Experiment. With the album Remainderfour managed to capture the soaring indie-rock sounds of those mid-90s Revelation bands like Sense Field and Elliott which, combined with Gemma's unique vocals, made for an impressive debut. Rock Sound loved the album so much the band were interviewed next issue and things were looking great for the band.

Unfortunately Chris was subsequently told that he was bordering on irreversible tinnitus and as a result was recommended to stay away from loud guitars. Chris left the band late 2005 and, although initially the band were determined to recruit a new bass player and carry on, the wind had been knocked from their sails. Remainderfour called it a day in February 2006.