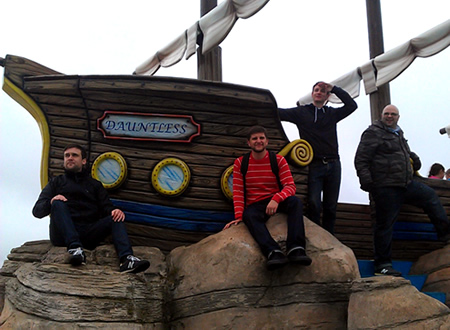 Formed from the ashes of Joe Ninety and Fig. 4.0 in 2003, The Dauntless Elite are the finest UK band to rip-off American Steel and get away with it...

Joe Ninety's Lee and Andrew and Fig. 4.0's Steve and Joe make up "The Elite" - a band who from the outset wanted to merge the sounds of the UK's finest (Leatherface, Snuff) with that of the US bands that were ripping off the sounds of the UK's finest (most bands from Gainesville) to create something all their own (while being obviously referential). We think they succeeded rather nicely.

Having met Chris and Hannah from Ghost Mice, The Dauntless Elite were invited to release the 6 track EP on the amazing Plan-it-X Records (home to Ghost Mice, One Reason, Japanther and, once upon a time, Against Me!). Security? was released in May 2004 to coincide with a US tour with Ghost Mice with a 10" vinyl version following a little later courtesy of Somebody's Song Records in the UK.

The band then started appearing on split 7"s like their punk-rock lives depended on it. A collaborative split 7" with Jets Vs Sharks was released on Bombed Out in 2005 with each band providing one new song each and the music to a second song. The vocals were then recorded by the other band. Confused? Don't be - the results were spectacular!

Next up were splits with The Because from Japan on the great Snuffy Smile Records and a split with Sunderland hardcore-punks The Mercury League (who selfishly split before they were due to record their Bombed Out debut) on Germany's Yo Yo Records.

In late 2006 The Dauntless Elite began recording their debut album, Graft, at Soundstation Studios, Horbury (Dugong, Pylon, Fig. 4.0). Released in 2007, Graft is testament to just how immediate and essential punk rock continues to be. Politically astute and with a biting satire the band had finally recorded the album we knew they had in them since day one. Yes, they still sound like a mix of all the aforementioned bands but taken as a whole this is unmistakable the sound of Leeds finest.

Since then the band have toured the US, played The Fest in Gainesville and been up and down the UK more than a few times and word is they're now thinking about album number 2. We can't bloody wait.