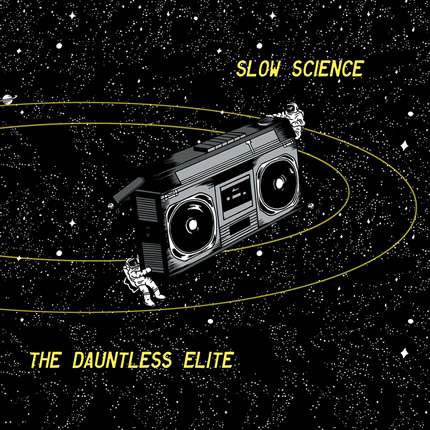 First up is London's Slow Science, a band that blew our socks off when they released their first demo back in 2011 (Christ, has it been that long!). The band have taken things pretty easy over the past year or so with members playing in the wonderful Axes (Big Scary Monsters) and Human Pyramids but they should be playing out and about soon. This is intricate pop/indie/punk played by some of the most accomplished musicians you're likely to meet - all the while Jon and Stacey trade back and forth with the vocals, complimenting each other wonderfully. We could throw around a bunch of amazing band names from the late 80s/early 90s to compare the band's sound to but it would probably do Slow Science an injustice as, in the here and now, they sound thoroughly unique. Smitten.

The Dauntless Elite, on the other hand, should need no introduction. They've been at this game now for over a decade and like your favourite tipple they are most definitely improving with age. The two brand new songs here might be our favourite songs from the band to date... Plus they sound all science-y and stuff. And let's face it, science is ace! This is about the millionth time the band have appeared on a split with another band (most recently they shared a 7" with The Steve Adamyk Band) but when the songs are this good who's complaining?

The record comes wrapped in some fantastic artwork by May Simargool and as an extra cherry on top it'll be coming out on coloured wax.