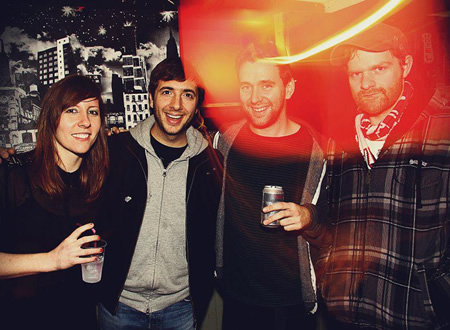 Slow Science - it's a story we've all heard a million times: an incestuous cluster of ex and current bands, members of which had played together before, were still playing together or just wanted to play together.

It was autumn 2010 and the timing was right. Paul (guitar) and Jon's (vocals/guitar) band Serf Combat had just broken up as had Stacey's (bass) band, Instruments. Al (drums) had left The King Blues. Getting together with a rich history of having also played in the likes of The Filaments, Black Tax and Heroic Doses, the idea was simply to write "big tunes".

By January 2011 a demo/ep, 'You're Welcome.' was written and recorded with John Hannon (Capdown, Remainderfour etc). Five tracks of upbeat, sing along, melodic, anthemic, indie infused, grunge driven, dual vocaled, punk rock. Described as being somewhere "between a trendy gruff band and late 90s Britrock", the ep showed off the bands musical prowess with wailing solo's and intricate song structures, whilst all the time staying true to the ethos of catchy songs and riffs galore!

When we heard the EP for the first time, we were floored. Seeing Slow Science live on a subsequent UK tour pushed us through the floor and into the basement below! Straight away we got them playing our annual NYNS all-dayer and asked them if they'd like to join the Bombed Out family.

A split 12" record with our own The Dauntless Elite followed in 2014, featuring two new songs from each band.

Soon after this, and largely due to other commitments - three quarters of the band also playing in the excellent Axes (Big Scary Monsters) and Human Pyramids - Slow Science decided to take a break. We really did think that would be it.

Fast forward EIGHT YEARS to 2022 and, against all expectations, Slow Science are back! Reforming to play the Manchester Punk Festival the band have also entered the studio to record two songs which were started on over eight years ago but which have been completed while recording. The result is two of the finest songs the band have ever written which are available now as the Sham Laws EP.