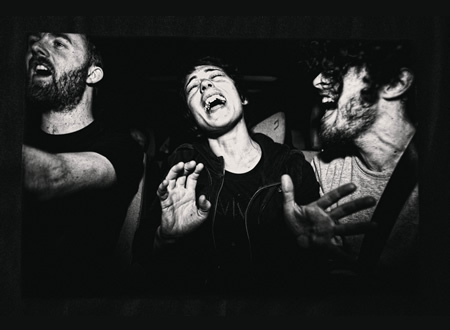 Fantastically raw and melodic pop-punk from Bristol and quite possibly the hardest touring band in the UK.

The Bristol-based 3-piece formed when like-minded individuals met up and discussed playing music together. After a couple of successful practices, Caves played their first gig in 2009 at The Croft in Bristol and they haven't took their foot off the gas since!

They have toured two continents, played shows of many different shapes and sizes; from basements of former squats in Germany, to sold out spots at The Fest in Florida, they've seen and done a lot of what makes being in a touring band exciting and fulfilling, including supporting and been supported by some of the best bands going, bands like North Lincoln, Good Luck, RVIVR, Lemuria, Spraynard and Latterman.

On the records front a 7" was followed by split releases which were quickly followed by their debut album, Homeward Bound, on Specialist Subject Records/Yo Yo Records in 2011. A compilation CD featuring the their earlier tracks was released soon after, as was a Caves/Sundials split 7" on US label, Kiss Of Death.

Fast forward to 2013 and the band recorded their 2nd album, getting in touch with us along the way. Having already had the band up to play Leeds a couple of times for the NYNS gigs we were more than happy when asked whether we'd release Betterment on CD, the LP version already being slated to come out, once again, on Yo Yo Records.

Betterment took everything that was great about Caves - the song-writing, the melodies, the rawness (musically and lyrically) and of course the "Whoa-oh"s - and built upon it tenfold. A stirling production job from Pete Miles gave each and every song the same kind of energy and urgency that the band were known for live as Betterment rushes headlong, start to finish, pausing to catch its breath for the acoustic title-track. Pop punk as it is meant to be played and another brilliant release that both the band and ourselves are immensely proud of.

More gigs and touring followed throughout 2013 before Dave Brent decided to amicably leave the band.

Today Lou and Minty are continuing to tour like their lives depend on it, calling in favours from members of Bangers or Muncie Girls to sit on the drum spot for now... We can't wait to see what happens next.