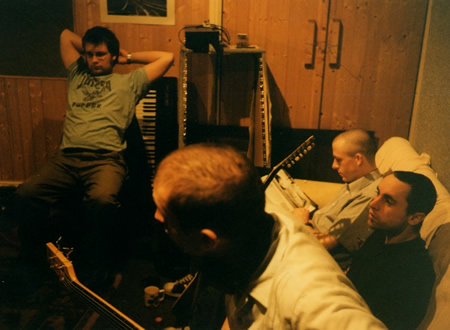 Hailing from Wakefield, West Yorkshire, Dugong honed their own unique brand of indie-rock/emo/punk as an integral part of the local underground music scene for a good 8 years.

In 1997 Andrew Jarvis, Sam Smyth and Matt Broadbent, along with Tim Bradley (who replaced original drummer, Wardy), teamed up to create the beast that would be known as Dugong. Apparently things really came together during the period the band lived together on Eastmoor Road, Wakefield, from 1998 to 2000. Though the house itself was rubbish, the music was increasingly less so.

It was during this period that Bombed Out agreed to release a 7" by the band. In 1999 Dugong duly entered Soundstation Studio in Horbury and recorded …I'm Not Leaving, the title based on an unfortunate dream.

Dugong continued to write and play and the gigs became further and further afield. Next up was The Eastmoor Rules album. Again to be released on Bombed Out Records. Originally it was recorded in late 2000, but some bastards burgled Soundstation and the recording was lost. It was recorded again early the following year and sounded better for it. It was released in March 2001 just in time for the bands first national tour with The Autumn Year.

In early 2003 the band recorded Hat Danko, their second album. Mark at Soundstation did a truly wonderful job capturing the sound the band wanted and everyone felt dead pleased. Dugong toured again in February 2003 with Codify and again in July with Brandtson. These in turn led to the band touring Germany twice.

Quick to the City, a record which was to be the band’s last, was recorded in February 2005 and released a couple of months later, just as the band were due to undertake an 11 date UK tour with label mates Kelly 8. The record achieved a fantastic amount of press, including amazing reviews in Kerrang! and Rocksound magazines and the future was looking bright for the band until the news of their imminent hiatus hit. Dugong played their last gig headlining the Sunday of the 2005 Out of Spite festival at Joseph’s Well in Leeds, with a show that ranked amongst the band’s finest.

For a while Matt joined Joe Ninety's Steve and Rob in The SWord who released their only album on Somebody's Song Records. He also formed half of Nathaniel Green with Pylon's Rob Taylor as well as occasitionally performing a solo artist under the Brown Hound James moniker.

Matt, Sam and Jarv went on to form Calcutecs who have now morphed into Messina (though Sam and Jarv have now left). Messina have a single out now and have an album in the pipeline.

Sam continues to play guitar for both Beasts and Tatako.

It may be interesting to note that Dugong have had 3 other Bombed Out band's reference them over the years: Joe Ninety covered "Last Time I was this Happy...", Kelly 8 have covered "Quick to the City" and, while not a cover, The Leif Ericsson did penn a song titled "Listening to Dugong makes me Miserable". Not bad eh.