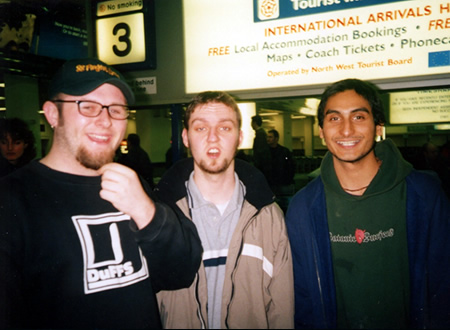 Iz, Heysi and Sellick formed Dropnose in the summer of '97 in the sunny Northern England city of Sunderland. Taking influences from the likes of Satanic Surfers, Ten Foot Pole etc., Dropnose managed to take the energy of the typical "skate punk" sound and fuse it with something a little darker (both musically and lyrically) to create something all their own.

In 1998 they recorded for the first time, the result being the Creamy and Uncommonly Good 3-song CD which was released by the newly established Deliverance Records. Eventually of course the band realised that Sunderland wasn't much cop and relocated to Leeds. Tours with Goober Patrol and Astream followed, the latter leading up to the Bad Taste Records Festival that October in Lund, Sweden where they played with the likes of Intensity, Last Days of April and The Weakerthans on "a well big stage".

The split CD with Astream on Bad Taste Records was released in 1999, complimented by both bands embarking on a full tour of the UK and Ireland. While the production was acknowledged by the band not to have been their finest the songs shone through.

It was after this that we asked them to record a record for Bombed Out so in the spring of 2000 the band recorded 6 tracks for a new self-titled release. A little belter it was too! Unfortunately the band decided to call it a day before we could get it released (the first band to succumb to the "Bombed Out Curse" which we successfully inherited from Crackle! Records) and so it sat on the back burner for a year until we finally managed to release it. I guess no one can say we don't stick to our promises. It was worth it though just so we could say John Peel had played another Bombed Out band (he played "More or Less").

Away from Dropnose, Iz played guitar and sang for The Autumn Year for a while and Heysi played bass in The Sex Maniacs, while both went on to make up two thirds of The Mercy Suite (with ex-Astream gutairist Bobby). Sel has since dropped off the radar but we hope he's doing well.