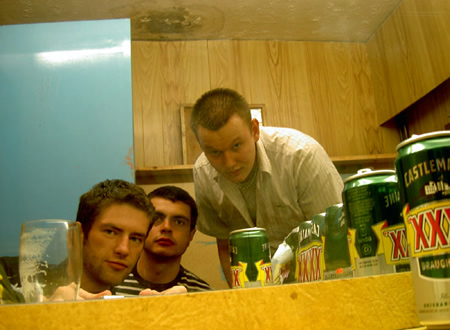 As the band themselves put it:

The distance travelled since their inception in the dark days of 1999 saw them leave a veritable slug trail of sweat and broken hearts across this Blighted Isle. No strangers to pressing forward in the face of ill winds, we've watched with baited breath as they made tentative forays into the colds of Sweden and Norway and we've listened with a willing ear at their brief but unmistakable audio transmissions on nationalised Radio - God bless John Peel.

The Eighty Six recorded output traced a band constantly evolving - from the melancholy [Raining & Falling], taking a shortcut through the melodic [What's My Problem Today?] and finally finding their place of rest in a place altogether more treacherous and heavier in tone [Army of Cats]. Along the way they shared their wares firstly on a Speedowax 7" along with Fishtake (The Take), Scuttle, Southport and more, then via the split 7" medium, firstly with Blocko (on Bombed Out) and then with Afraid of the Dark (Happy Astronaught). With a sound that walked the then rarely trodden path between Jawbreaker and Jawbox their legacy is of a band unapologetically out of sync with the then current trends, forging their own way in a world full of doubters.

Perhaps the 'Six will also be remembered for being one of the unluckiest bands in Leeds - epitomised by their set supporting At The Drive In where an unprecedented 3 strings were brocken! They actually carried on a lot longer than ATDI did after said incident. Telling perhaps.

Eighty Six last took to the stage in 2004... Just when Army of Cats was getting fantastic reviews across the board. It should be noted however that the band have never formally said their journey is over...

In fact members of Eighty Six can still be seen making up 3/4 of the UK's premier (only) Descendents/All covers band, Descendage.

On top of that, away from the 'Six, our three protagonists helped fill out the ranks of That Fucking Tank, Eagle Eye, Buzzkill and Kill Yourself, as well as, for a time, running the über-DIY Obscene Baby Auction Records. James is currently playing in The Magnificent. Graham continues to make ace art.