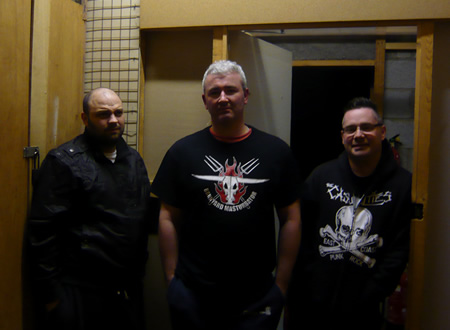 Homebrew formed as a four piece band in December 1995 with the original line-up being Dave on bass, John on drums, Adrian on vocals and Andy on guitar. This line-up lasted 8 months, 3 gigs and one 7 song demo. Adrian was then sacked for being a posing hippy bastard.

Two further five song demos followed with Dave this time on vocal duties. Two songs ("Punch Drunk" and "Homebrew") from the first of these demos were the bands first release on a split E.P. with North Yorkshire (Thirsk) Ska punk legends The Write Offs. Another track from that demo ("Legacy") ended up on the excellent No Front Teeth Compilation. 3 Songs from the second demo were released on the Compilation - Faster Louder Volume 1, which also contained the first released songs by Freaks Union.

Andy left soon after this due to having a job in London and not being able to commit himself to the band as much as he would like. The band now recruited Lee from Joe Ninety as a "temporary" guitarist and Aaron form The Write Offs as a permanent singer. This line-up then recorded 4 songs ("Fuck Guttermouth", "Ciderpunk Revolution", "Fuck 'N' Drink" and "Force Fed") at Huddersfield College, in about 2 hours, to be released on the You Make Me Sick compilation (which also included songs by Joe Ninety and Dropnose). A further four were recorded later that year to make up the Monarchy In The UK E.P.

Aaron left the band shortly after that to follow his girlfriend down to Portsmouth and Lee realised he was "in it for life" - Dave was back on vocals. Now a 3 piece again, 7 songs were recorded and released on the extremely hard to get Music For The Underprivileged compilation CD.

It was at this point that Homebrew came to us (actually, they'd been bugging us for years to release something by them but we're stubborn sometimes). They went into Soundstation Studios, Horbury and recorded a bit of a belter in The Heart of Insurrection (we were as surprised as anyone). A handshake and some dodgy-dealings later (involving Aston Boss Tuneage and his X-Fist label) and Homebrew's first actual "full-length" was born. The Heart of Insurrection is a testament to the 14 years since the band's inception and we believe it’s been worth the wait – angry and politically astute diatribes blend with street punk anthems and a couple of older tracks have been re-recorded to sit flush with the newer songs. It's really rather good. Just ask Joe from The Dauntless Elite.

Obviously, being a Homebrew record, we recommend enjoying this fine release with a nice pint of cider.