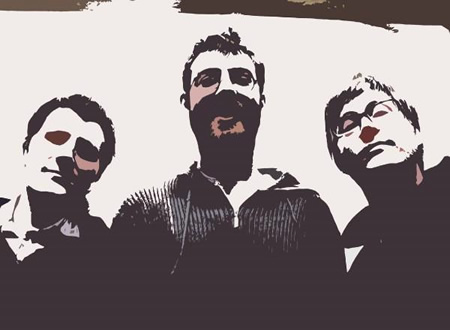 Take the classically British sound of Hooton 3 Car or Chopper and infuse with the kind of vocals that gave Blueline Medic, Pezz or, yes, Jawbreaker such heartfelt distinctiveness. That's Zapiain.

Taking their name from a particularly agreeable, if highly volatile, brand of Spanish cider, Zapiain first came into being in the summer of 2006. Based largely in the small towns on the South side of Leeds (Dewsbury mainly), they rose from the ashes of numerous local bands - most notably Crackle! Records band dONfISHER whose 7" Setting New Standards In Apathy produced by Frankie Stubbs was a bit of a forgotten gem. The band originally comprised of two chefs (Chris Hall and Bob Maguire) and an art teacher (Chris Haigh).

Nice looking food however isn't the best way to apply yourself as a punk band so Zapiain forged ahead self releasing their 1st EP ERM..., recorded in the winter of 2007 by Mark Sturgess at Soundstation Studios in Horbury. Catching the attention of another local band stalwart, James Booth, all it took was a short conversation and a long drinking session to increase Zapiain's guitar quotient by one.

The new four piece Zapiain trawled the local gig scene until early 2008 when Bob decided he'd really rather make music that sounded like tanks and bombs with his new band KursK. Luckily Booth had enjoyed hitting things since he was a small child and so switch to drums creating the current "power trio" line-up.

In December 2008 the band's 2nd EP, Wrong In Our Own Way was once again conceived at Soundstation and, once again, self released the DIY way. On the back of this Zapiain pursued a relentless touring schedule, venturing to far flung exotic places such as, erm, Wales.

As the gigs and interest increased Zapiain decided to finally record their first full length album and visited Soundstation studios for a 3rd time, bizarrely in the middle of the 2010 world cup. Luckily for them England did rubbish, resulting in the magnificent debut Jibberjabber. Blending melodic hook filled punk and heartfelt lyrics with intricate distorted guitars, an aggressive rhythm section and gravelly, soulful vocals, Jibberjabber ensured that the band could finally have a rest from releasing their own records and let someone else take the reigns. We at BOHQ were smitten and through the power of the internet we hooked up with US label Unsane Asylum to co-release the album which should see the light of day towards the end of 2010.