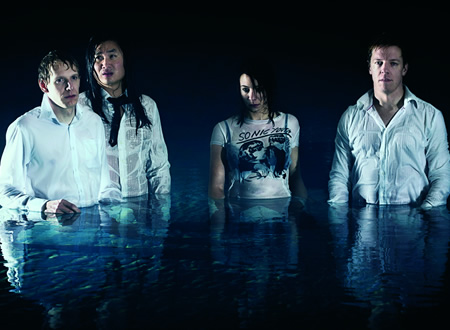 Swedish post-hardcore with fantastic female vocals and a rhythm section Albini would be proud of.

Kelly 8 formed in Autumn 2001 in Uppsala, Sweden, having met each other through work and mutual friends. Having already been in a number of bands, from hardcore to rock, they focused on their common influences with Kelly 8, bands like At The Drive-In, Engine Down, Jawbox, The Jesus Lizard, Fugazi and Shudder to Think providing the heart of their inspiration.

Having recorded three demos and also had a track featured on Chapter 8 of Deep Elm's Emo Diaries series the band sent a demo to Bombed Out Records and we immediately took an interest. This resulted in The Setup (a mini-album that compiled the best of those early demo's into one release) being released in the Autumn of 2002 and in the band doing a short tour of the UK in January 2003 with The Mercy Suite. The Setup received fantastic reviews from Kerrang! (who gave the record a maximum 5Ks), Punk Planet, Fracture and scores of fanzines and webzines with many concluding that Pia's vocals were the band's trump-card. As far as introductions go it was a belter.

A video was created by the band for "The Competition" which was also released as a 7" single released in 2004 by Swedish label Wreck It!. The 7" also included an early version of "Break a Habit" (a different version would appear on their debut album) and exclusive track "Do You Mind Reading".

Towards the end of 2004 the band went back into the studio with Carl Vikman (Jeniferever, Trapdoor Fucking Exit) for a five week stint to record their debut full-length, The Technique of Pushing Someone Forward. A more varied affair than The Setup, it showed the band trying their hand at a more restrained sound, though it still contained some of their heaviest tracks to date. Kelly 8 followed this again with a UK tour, this time covering 11 dates with label-mates Dugong.

Skip forward to 2009 (the band took some time off to recuperate and write that tricky second album) and Kelly 8 have returned stronger than ever with The Union.

Produced once again by Carl Vikman at EAR studios in the band’s hometown of Uppsala, The Union is perhaps the bands most consistent release yet. Surprising, perhaps, given the inclusion of the band's first cover - a bass-heavy reworking of Dugong’s "Quick to the City". Here Kelly 8 have completely made the song their own.

Of the brand new Kelly 8 songs the band veers from the almost serene pop of "Some kind of Wall" to the grunge-rock of "Spit it Out" with ease, all the while maintaining a controlled undercurrent thanks to a superbly surgical rhythm section that would bring to mind bands like The Jesus Lizard or Helmet were it not for the more refined guitar melodies that carry through the album. Once again we're proud for it to carry the Bombed Out logo.

A handful of gigs in Sweden and a return to the UK will follow.