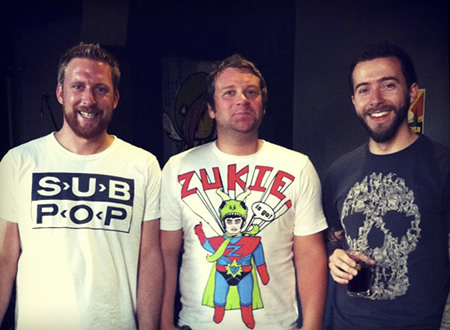 Brown Hound James is the alter ego of singer-songwriter Matt Broadbent (formally of Dugong, Nathaniel Green, The sWord and Messina).

As lead songwriter in Dugong, Broadbent began to find some songs didn't quite fit in with the Dugong "sound", but seemed too precious to forget and leave unheard. Many of these tunes would later appear as joint collaborations with Rob Taylor in the genre crossing Nathaniel Green but again some songs just didn't seem to gel there either. As such between 1997 and present day Broadbent had a catalogue of up to 350 songs that were loosely demoed but went unreleased.

Projects came and went but Broadbent never stopped writing, recording and honing his craft, diversifying in the process to take in music from all genres. The 2005 self-released demo EP Brown Hound James displayed a more Blues, Folk and Country lilt as well as Broadbent's more regimented pop tendencies. It is this sound that is taken forward into his debut release on Bombed Out Records.

At The Home Of The Heartlands is a collaborative piece written by Broadbent and produced and engineered by Ray Tovey (Tovey also plays the majority of the instruments on the record as well). That said the pair enjoyed the company of dozens of musicians from the sprawling DIY scene (members of The Dauntless Elite, Dugong, Milloy, Protectors and Pylon have lent their talents to either the album or the live band over the last year or so) not to mention the aid of some really close friends and family. The album quickly formed under Tovey's guidance and songs appeared weekly, sometimes daily. Something really special began to form and At The Home Of The Heartlands was completed in November 2011.

The Brown Hound James Band are now taking the album on the road and playing live as a Trio. The Band features Broadbent, Ian Smart (formally of Milloy and Messina) and the formidably wonderful Tommy (formally of Everybody Is Going To Die). The Trio replicate a number of songs from the album and have also worked on a number of new compositions that will be appearing in their live set so be sure to watch out for them!