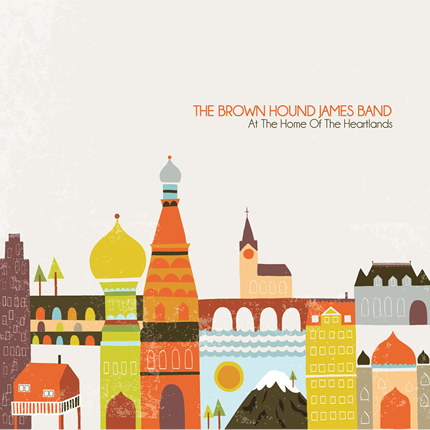 From alt-country to gentle indie-rock, with a smattering of Dugong-styled punk thrown in for good measure, The Brown Hound James Band present their debut album.

If the name sounds familiar it may be because Brown Hound James is the on/off alter ego of Matthew Broadbent (Dugong/Nathaniel Green/The sWord/Messina), albeit one that's been a little quiet in recent times.

With the name now resurrected, and with the help of Daisonic knob-twiddler Ray Tovey and various Leeds and Wakefield punk-scene alumni (members of The Dauntless Elite, Dugong, Milloy, Protectors and Pylon have lent their talents to either the album or the live band over the last year or so), The Brown Hound James Band have recorded a bit of a masterpiece.

Titled At The Home Of The Heartlands, the album will surprise many with it's maturity and confidence and with Matt's willingness to explore new musical avenues outside of what many would expect given past endeavors. It's varied yet flowing; accomplished yet completely DIY, at times subdued and introspective, at others rousing and life-affirming.

So, a typical Bombed Out release? No. But don't let that put you off. Those of you with an open ear and perhaps a few Wilco, Son Volt or even The Weakerthans records in your collection will find something to enjoy here.

Produced and Mixed by Ray Tovey.