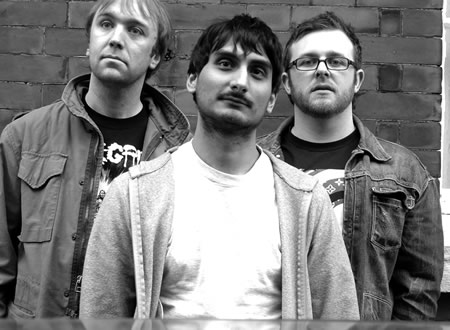 After the demise of Dropnose way back in "The Late Nineties", Iz and Heysi, who had been in many a bad band together through college and beyond, decided to give it one more shot. Reasons being they loved what they had achieved during the Dropnose days. That and the fear of ending up in one of them trendy emo-shouty bands.

Word on the blue and yellow continental street was that a little friend and his good lady were moving from Malmo, Sweden to our great country indefinitely, and not only that, but they would be setting up camp here in Leeds. This little man came in the shape and form of Robban "Rob-bet" Johnsson from Bad Taste Records' latest split-up, Astream.

After spending all his life savings in one month, the now legendary "Bobby The Dollars" and the two Dropnose fellas were good to go. Sneaky songwriting previous to "Bobby" moving to England meant that the new band were weeks away from their first gig, which incidentally was booked by local promoters "Out Of Spite" supporting "the kids" favourite, but unfortunately not The Mercy Suite's favourite, xGood Clean Funx (after how they treated Iz's drum kit and their pooie attitudes to other folks equipment and good nature). Not to be deterred by these "jokers" TMS carried on playing gigs in Leeds and now nation-wide.

They were now ready to make it up to "Steve Jackson", Bombed Out Records MD, who not only agreed to release the Dropnose s/t EP after the band had split, but was still willing to release the first TMS EP in 2002 entitled Credis Quod Habes et Habes. This would lead to tours with Otherwise and Bombed Out's very own full Swedish import Kelly 8, where TMS got barred from the run-down London venue The Verge for apparently stealing a "Drum Mat". Evidence has risen since this event to reveal that US "Dad Band" Koufax and suicidal midget Kevin Devine were to blame. Rest assured, heavy measures will be taken as soon as possible to resolve this misunderstanding.

It was at this point that one more challenge arose that not even the evil Satan (Wogan?) himself would stand in the way of. Bobby was to leave England and move back to Sweden within months of some brilliant news (a baby Dollars was on the way)!!! This left TMS in an unenviable position. Allegedly, there had been talk in TMS camp of abduction, maiming and more disturbingly, plans were found in a skip nearby Iz and Heysi's house for a small sub-dwelling to house two people and a small child in the cellar of a small Victorian terrace in Pudsey. But they left for Sweden safely in late-December 2003.

Iz and Heysi would find themselves back to where they didn't expect or want to be 2 years on after the Dropnose saga.

"Luckily" for them, TMS had played a gig in King's Lynn (Norfolk) a month prior to Bobby leaving. This was to be Bobby's penultimate gig. Joining TMS in the PUNTO was "Long Term Drum Veteran" - "Dave Allun" of ex-Vengeance of Gaia, Genghis Khan & Voorhees fame, later pan-hitter for The Sex Maniacs and The Horror. Incredibly, plans of TMS were never mentioned that night. But the night was to change TMS forever.

Due to legal reasons, contractual rights and a rumour of an incident involving the A26 at 03:08, a shovel and a collective hatred for the colour RED (Bobby included), "fans" of TMS will be happy to know that Dave remained with the band long enough for them to record their debut album, Crestfallen.

Upon it's release Big Cheese magazine got chuffed: "One of the most underrated bands on the Bombed Out roster, The Mercy Suite have finally managed to capture their incredibly energetic live sound on record.", while Punktastic said "'Crestfallen' is fast and furious and barely leaves you a second to catch your breath". Mike Davies liked it too and "This Green and Pleasant Land" got some airplay on The Lock Up.

An über-tour with The Mercury League in 2006 (hot licks and dope riffs ensued) followed but all was not well with the band and the "Bombed Out Curse" struck again later that year. The Mercy Suite called it a day. Bum!

Iz now hits things for Leeds supergroup Beasts and Heysi can be found doing his graphics thing at +DTAM+ HQ. Dave Allen is about and probably still plays drums in 8.2% of all Leeds punk/hardcore bands.