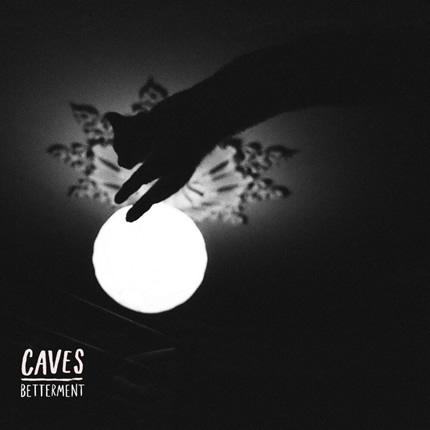 The stunning sophomore album from this well-loved Bristol-based trio

After a 7”, a number of split releases, a collection CD and their debut album (the majority of which were released by the excellent Specialist Subject Records), Caves present their second album, Betterment. A fitting name given that this album builds on everything the band have done before and amplifies each and every one of the band’s strengths. You already know how great Caves are live, but this is the best version of Caves you will have heard so far on record.

The song-writing is more focused, the melodies soar, the backing vocals still demand to be sung (or shouted) along to live and, because of a magnificent production courtesy of Pete Miles, the songs here at times seem to have a near-unstoppable urgency. Yep, that “live” sound is captured perfectly and makes for an exhilarating ride; whether you’re listening to the rapid punk pop of “Rubino” (as fine an example of the aforementioned urgency as you’ll find), the stripped down title track, the power-pop of “Babyccino” or the epic (by Caves standards) closing track, the aptly titled “Ender”.

Yes, the album whizzes by in just 26 minutes but then this was exactly the kind of situation that the “repeat” button was created for.

Despite the fact they only formed in 2009,  Caves seem like they’ve been around for an age. This perception is understandable given their relentless touring ethic (they’ve toured UK, Europe and the US multiple times already) and their relatively prolific output (this will be their 6th release in 4 years). As one of the hardest working DIY bands in the UK it should come as no surprise that the band will be embarking on a 30 date tour around Europe and the UK throughout  September/October, culminating in gigs at that most famous of punk-rock Meccas: The Fest in Florida.

To summarise, we were very proud to have been asked to be involved with this record and it’s great having Caves on board. Betterment  surpassed all expectations which, for a band of Caves calibre, should be all you need to know.