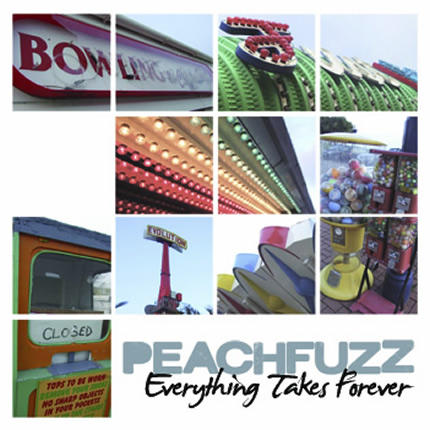 Everything Takes Forever
by Peachfuzz

Heart-on-sleeve indie power pop from three Welsh lads who grew up listening to The Replacements, Big Star and Crazy Horse. Take the songsmithery of Bandwagonesque-era Teenage Fanclub, the lyrical finesse of The Hold Steady and rough it up with vocalist Adam Jones' "Mike Ness-meets-fellow-Welshman-Kelly Jones'" croon and you'll have some idea of where this band are coming from.

Everything Takes Forever is the second album from Peachfuzz, following on from their 2008 debut. Unashamedly a summer album, with it's ballsy yet crafty pop hooks and angst-ridden lyrics, these ten brilliant tracks will conjure up an overall image of teenage life in the Valleys. Adam sings about lost love, teenage excesses and hardcore shows with all the authenticiy of someone who's been there. It's no wonder Ben Deily from The Lemonheads called Peachfuzz "So damned brilliant".

Recorded, mixed and messed with by Eifion Lloyd at NOLEX Studios, Bridgend.