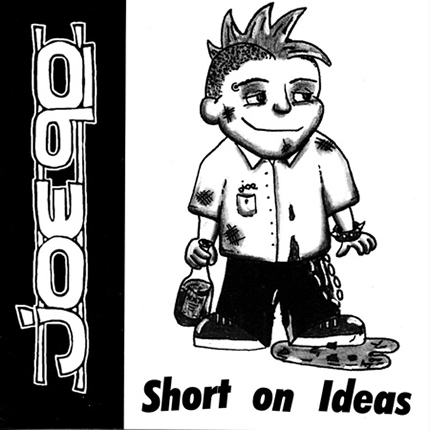 Short On Ideas
by Joe Ninety

When I (Steve) first moved to Leeds back in 1998, my brother, along with 2 good friends from back home (that's Whitehaven, Cumbria) were already based in the Leeds/Bradford area and were in the process of getting a band together. One drunken Londoner later and Joe 90 was formed.

They wrote some songs, listened to Snuff, wrote some more songs and when the time came to get someone to pony up the cash for a record I joined forces with good friends Alex Hurworth and Jamie Duncan. It seemed like a good idea at the time. Bombed Out Records was born!

The 7"s arrived mid-September 1998 and good reviews and positive vibes followed. We copied the design of the then recent Crackle! 7"s with regards the 7" labels and a lad by the name of Graham Pilling was kind enough to draw some pictures for the insert (the cover was drawn by Paul Collins). It was raw, it was a little scrappy but it had heart and sincerity and it was just a little bit great.

Anyway, as the record is now out of press here are the songs for your listening and downloading pleasure. They've been remastered by Joseph Alderdice from the best versions of the songs we could find (alas old-school mp3s), the original master but a scratched, corroded and unlistenable relic, but we hope you enjoy them none the less.

Every story, as they say, has a beginning...