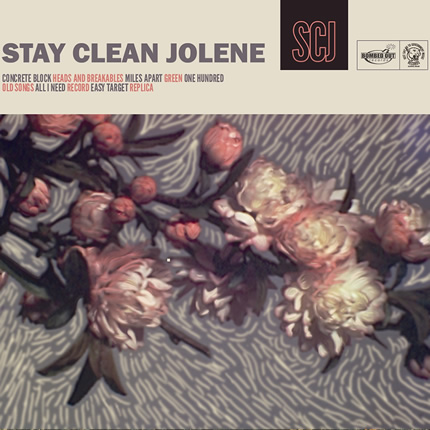 Featuring members of The Leif Ericsson and The Great St. Louis, Stay Clean Jolene's pedigree speaks for itself. It should therefore come as no surprise to learn that their debut, self-titled, album is a masterclass in how to pen perfect, anthemic, heart-on-sleeve punk-rock in 2014.

While many bands of this ilk are more concerned with what's going on across the pond at the latest Fest than with the rich legacy of homegrown legends like Leatherface and Snuff, SCJ play homage to the UKs finest while building on the incredible foundation of their previous bands output to produce an album greater than the sum of it's parts.

From the stomping opener, "Concrete Block" via the already classic "Record" (a song featured on the bands' debut 7" but re-recorded here) to the anthemic closing track, "Replica", this is an album that rushes headlong, beginning to end, with a sense of confidence you seldom hear these days.

These 4 lads know exactly what they're doing and Stay Clean Jolene is the breathtaking result. At the end of the day, it's an album so good that labels like Dead Broke, Drunken Sailor, Eager Beaver (all releasing the vinyl version) and co-releasers of the CD, Just Say No To Government Music, jumped on board without a moments hesitation.

A classic in the making.