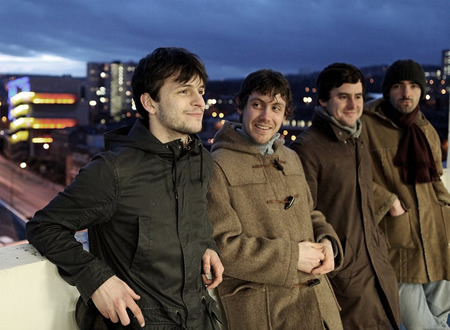 "A raucous attack of noise with an underlying groove and a sense of melody."

Sam, Loic and original drummer Josh formed Wooderson late 2007, as a means to explore different ideas to what Josh, Loic and future guitarist Ash's other band at the time where doing. Loic and Sam both attended school with each other in Cleethorpes and played in a local band in Grimsby for a number of years together before moving to Sheffield in the mid 00's. Almost instantly Wooderson began to take precedence.

Their first gig was in February 2008, coinciding with the recording of their first demo. Soon afterwards two further songs were recorded for a split 7” with Stoke-on-Trent's clangy, angular four piece Ox Scapula. Both bands spent the rest of 2008 touring - Wooderson with a new member, Ash, who'd joined on second guitar in order to fill out the band's sound. Ash had been a natural choice as he had played in Loic and Josh's previous band and also lived in the same house as the lads. Turns out Sheffield is almost as incestuous as LS6!

The 7” was finally released in January 2009 via The Audacious Art Experiment and We Like Danger.

In the summer of 2009 it was becoming increasingly clear that Josh wasn't into the idea of gigging and touring as much as the rest of the band and hence he parted ways. Loic and Sam's school friend Ben had recently moved from Cleethorpes to Sheffield, and although he hadn't played the drums in around 5 years, he was swiftly asked to join. With plenty of gigs already lined up, Ben learned the songs almost instantly and Wooderson haven't looked back since.

A new bunch of songs were written and recorded with Matt J (now of Suburban Home/Hookworms) in October. The recording process was completed over the course of the next few months and a limited CD-R run of the debut Wooderson EP was released in time for their tour with Derby's Crash of Rhinos in February 2010. July of that year also saw the band undertake a highly enjoyable and successful 10 date UK tour with friends and future Bombed Out and Art For Blind label mates, Saturday's Kids.

At the beginning of 2011 Wooderson started writing the rest of the songs that where to make up their debut album (a two track demo appeared online that April) and in an abnormally hot weekend in October 2011 all of the instruments for what would become their debut album, Let The Man Speak, were put to tape with Karl Sveinsson at the band's own practice space, The Audacious Space in Sheffield. The vocals were recorded and all the tracks were mixed during an incredibly cold weekend in January 2012, with Ed Waring in the crypt of the Christ Church, Liversedge. After much discussion, the track order was finally decided and it was sent to be mastered by Tom Woodhead at Hippocratic Mastering in Leeds.

Art For Blind Records expressed an interest in releasing the album and, following a cheeky e-mail to us at Bombed Out, so did we. Having watched the band from a distance over the years it was probably one of the easiest choices we've ever had to make.