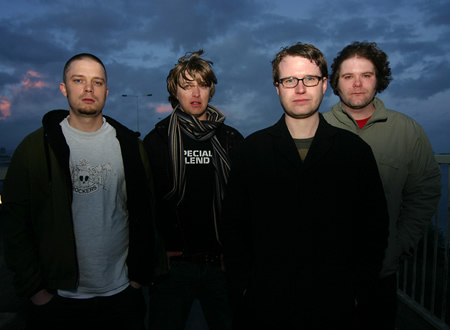 Wales' answer to Jawbox, The Take are represented as honest and passionate a take on (post-) punk rock that you could ever hope to hear.

Cardiff's Fishtake were formed in 1998, the name apparently having been chosen “from the ether”. After numerous line up changes and reshuffles, the band settled on the line-up of: Jim Williams - Vocals/Guitar, Paul Copner - Guitar, Charles Curran - Bass, Will Rees - Drums. In 2002 Fishtake recorded their debut EP, Private Foul and Surface Water, which was released on the band’s own 23:59 label.

About a year later the band went into the studio again to record their first full-length, Propeller, after which Paul Copner left and was replaced with Pete Leakey. Fishtake became The Take (to avoid being called Fishcake, Fishtank and other 'hilarious' names that people billed them as) and the fantastic Propeller saw the light of day courtesy of Household Name Records in 2003. It was bloody brilliant too, with Household Name Records describing the record as "...driving rock with reflective quiet parts and the drive of Jawbreaker, a good dose of the Dischord and Sub-Pop punk/rock sound. A release that is constantly name-checked by Household Name bands and others as one their favourites we've released."

After touring the record (alongside The Lawrence Arms, Capdown and more) Will Rees left the band and, as a result of being temporarily drummer-less, The Take went through a bit of an inactive spell. Eventually Nathan Phillips joined on drums and the band started writing a whole bunch of new songs that were then recorded at the end of 2004 (eventually finished May 2005). Two songs from this session were released on a split 7” with Night and the City of Broken Promises on Détournement Records, but the majority made up Dolomite, the band’s second full-length, released on Bombed Out Records in 2006.

Dolomite brought the band fresh comparisons to UK alternative-rock heroes like Bivouac and Cable while name checks to The Foo Fighters, Samiam and Jawbox were also common. Things looked bright as the band recorded a second session for Radio 1's Huw Stephenson in 2007 and undertook a handful of dates with Dugong-spin-off-band Calcutecs.

Alas, all great things come to an and and The Take decided to call it a day early 2007. They played their final gig in Cardiff on the 6th April 2007.

The good news is that Jim and Charlie are back and seemingly continuing where The Take left off with new band Markers while Pete continues to play guitar for The New 1920.