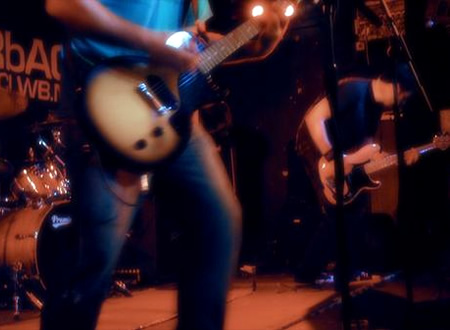 Peachfuzz is a rock'n'roll band.

Adam, Lewis and Jon fucked around in various garage bands of dubious pedigree for a number of years before forming Peachfuzz in March 2007. United by a common love of Big Star, Badfinger and Bandonwagonesque-era Teenage Fanclub as well as the sloppy majesty of The Replacements and Crazy Horse, it seemed to them that nobody was writing those sorts of songs anymore... So they started trying to write their own.

Their first record, So Here We Are Tonight, saw the light of day in April 2008 on the now sadly defunct Rat Patrol Records. It was recorded for £300 over two days and featured harmonies and choruses. It did okay, attracting some respectable reviews, shifting a few copies and gaining a fair bit of radio play. Some shows were played.

In August 2008 the band recorded a live session for Adam Walton's BBC radio show. It was engineered by Carl Bevan of 60ft Dolls infamy. A bunch more shows followed, mostly with punk bands. Some of them really good ones. As a result, the band got a bit tighter and a bit grittier but the harmonies and choruses stayed. Good times were had. While all this was going on there were divorces and marriages and children and a new record got written.

Which brings us to Everything Takes Forever which was completed in November 2009, to be released by Bombed Out Records in July 2010. It cost £350 to record. That's inflation, though.