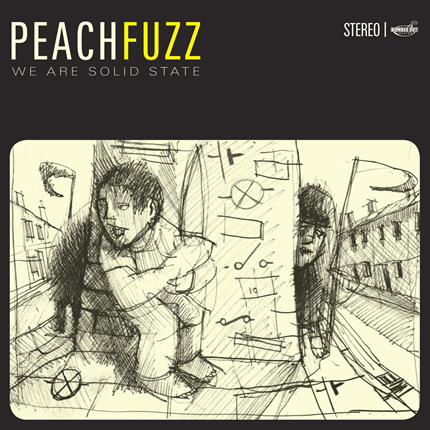 We Are Solid State
by Peachfuzz

The Bridgend boys are back with their third album in a year when alternative rock seems to be making a bit of a comeback.

Determined not to simply re-trace their steps and release Everything Takes Forever Part 2, Peachfuzz have instead turned everything up to 11 and thrown caution to the wind with 10 tracks that somehow manage to bridge the gap between balls-to-the-wall rock and roll and their softer, more measured power-pop sensibilities.

This is all neatly illustrated by the opening track, a Social Distortion styled punk rock anthem that straight away sets the stage for what's to come.

Only it doesn't. Not really... "Like I Do" comes across like Screaming Trees at their best (Adam even goes a little Mark Lanegan as he repeats the song's title at the end), "If It Makes It Easier" harks back to the Teenage Fanclub influences that have been a part of the Peachfuzz DNA since day one and Nowhere Calling gives definite nods to Neil Young. The album ends with the epic Oh Cordelia! - the longest track ever to appear on a Bombed Out release which ends things in style with a coda the aforementioned Fannies would have been proud of back in their Bandwagonesque days. Oh, and we've not even mentioned the solos! Dear God... The solos!

Yep, make no mistake - Adam Jones and the lads have gone and done good. 2012 has already blessed us with a great Soul Asylum album and Bob Mould returning to his Sugar-y best so perhaps it's fitting that Peachfuzz have chosen so confidently to push onwards and upwards with We Are Solid State. To put it bluntly, it's a fucking beast.